Published recently by the authors (Holliday, Gautney and Friedl) and Jean-Jaques Hublin (one of the commentators) on Academia.edu is Right for the Wrong Reasons: Reflections on Modern Human Origins in the Post-Neanderthal, 2014, Current Anthropology: 55(6), pp. 696-724.
Genome Era.


The authors contend that the persistence of Neanderthal genes is more readily explained by the Assimilation (AM) model than the Replacement with Hybridization (RWH) model and reject Multiregional Evolution (MRE).


"We argue this because we reject one of the major tenets of MRE: global gene flow that prevents cladogenesis from occurring. First, using reconstructions of Pleistocene hominin census size, we maintain that populations were neither large nor dense enough to result in such high levels of gene flow across the Old World."

All scenarios suggested for population sizes are at best untestable and at worse entirely fictitious (Bednarik 2013). The failure of many Pleistocene archaeologists to comprehend the implications of taphonomic logic are readily illustrated by the tendency to base these population estimates on the archaeological record. Of course this record is not a record of human population sizes and/or distribution but rather is representative of where the best preservation conditions occur and where researchers have looked. For instance, some estimates assume that there were large unpopulated regions. However, as Bednarik (2013) suggests, a sensible null hypothesis would be to assume that by 45,000 years ago all environments of four continents were as densely occupied as their carrying capacities allowed for. In other words, that there was a contiguous population from Africa to Asia. In such a scenario, following thousands of years of regionalisation reticulate introgression, genetic drift and episodic genetic isolation may all have occurred as suggested by Franz Weidenreich's in 1946. Note that the multiregional model of polycentric  human evolution has diagonal lines (Figure 1) which accommodate these conditions.
The Assimilation theory (AM) concedes the occurrence of genetic exchange between so-called "Neanderthals" and "Modern Humans", i.e. it accepts that they are conspecific - able to produce fertile offspring (Bednarik 2011). AM merely claims an in-flow of African genes. All models of reticular gene flow are in fundamental agreement with the original "trellis" diagram of Weidenreich and AM is no exception however positioned. Wrong isn't right. 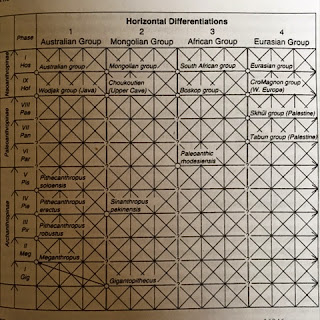 What the authors attempt to do is show that these population estimates, which more often than not are simply circular references to the dominant and false Pleistocene archaeological narrative, support the idea that cladogenesis may have occurred - resulting in "modern humans". The duration of time required for reproductive isolation to have occurred is suggested to be in the region of 1 million years and therefore the conclusion of the authors' is at odds with their own estimate as Wolpoff notes in his commentary. They are right and wrong for the right reasons.