This week Chris Stringer tweeted his response to the Nature paper "An early modern human from Romania with a recent Neanderthal ancestor". 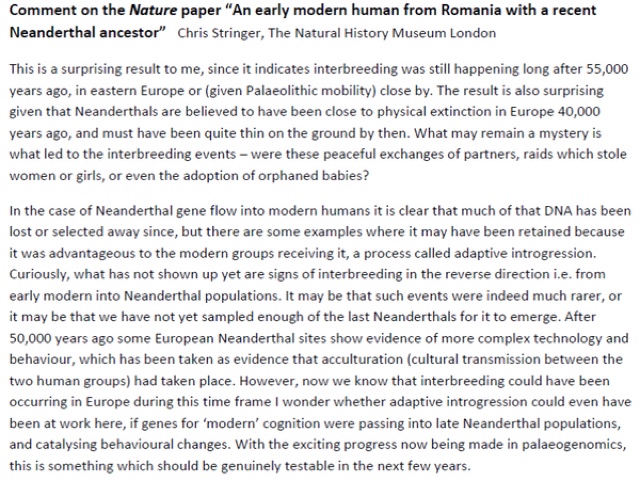 Chris Stringer's comments come as no surprise to those closely following his shift in position: from proposing that so-called "anatomically modern humans" originated as a separate species from Africa who upon migrating into Europe were unable to interbreed with the resident Neanderthals which they soon "replaced", to a position which fundamentally refutes this theory.

Stringer may be one of the last anthropologists to be surprised by the results. By referring to the "belief" of a Neanderthal extinction he implies that the results are extraordinary, or in other words not to be expected to be representative of a wider pattern. Of course by applying taphonomic logic it is evident that the results add further to the evidence refuting the idea that Neanderthals became "extinct".
But before examining his comments closer it is important to scrutinise the facts as they are presented. It is implicitly claimed in the title of the Nature paper that Oase 1 is a "modern human" yet even the description of the mandible by Trinkhaus et al cited (http://m.pnas.org/content/100/20/11231) makes it clear that whilst there are some modern features there are also archaic and derived Neanderthal features. At best, the individual could be considered to be transitional (from robust to gracile) but by no stretch of the imagination could it be concluded that they were a "modern human". Indeed if we assume that Oase 1 was indeed a Neanderthal then the results only add to the evidence for continuity between the robust populations of the past and the gracile populations of the present.

Not unusually but rather typically, Neanderthals are presented by the professor as being cognitively inferior to "modern humans" although no evidence is presented to support this claim. Moreover, there is no explanation for why these hypothetical Neanderthals, who if they are assumed to lack "complex technology" or "more complex behaviour", should want to mimic behaviour or adopt technologies that they had no need for. Not only is there no evidence which places a "complex technology" directly with a specific species or even group of humans, all the evidence suggests that wherever this technological development arose it developed in-situ and over a long period of time (see blogs passim). There simply was no "replacement" of one technology by another. Indeed mounting evidence refutes the previously favoured hypothesis which strangely starts from a premise that denies Neanderthals were capable of a range of behaviours observed in modern day humans until presented with overwhelming evidence to the contrary.
Posted by Richard Wilson at 07:05